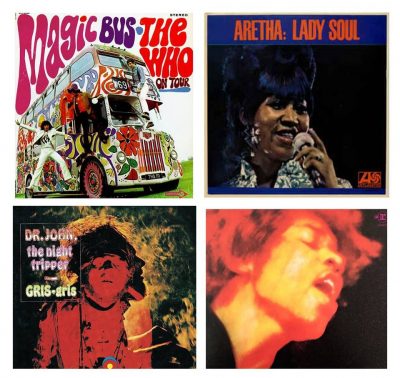 1967 was the Summer of Love but 1968 changed the world in ways still felt today. Bobby Kennedy and Martin Luther King Jr. were killed. Tommie Smith and John Carlos raised a fist on the Olympic podium. Apollo 8 circled the moon. The Tet Offensive turned the Vietnam War. Richard Nixon turned up in the White House.
In music, The Beatles released the White Album; Jimi Hendrix lit up Electric Ladyland; The Rolling Stones released Jumpin’ Jack Flash; Aretha Franklin coined Lady Soul; Marvin Gaye Heard it Through the Grapevine and Otis Redding was Sittin’ by the Dock of the Bay … among many, many others.