You are here: Home › Phoenix Books

In Rutland, of course.

The famous children’s book character in the striped shirt and black-rimmed specs is visiting over two dozen local businesses throughout our community this July.

Those who spot him can win prizes – and get entered into our grand prize drawing!

Find Waldo is a fun summer vacation activity, and a wonderful way for residents to get to know some great local businesses.

Celebrate spring with Eileen Christelow and a storytime featuring her new book, Robins!

Narrated with humor and filled with kid-pleasing details, this is a fascinating account of how robins grow up.

Eileen Christelow has written and illustrated numerous best-selling picture books including ten popular stories about the Five Little Monkeys, Letters from a Desperate Dog, and Vote!

She lives with her husband in Dummerston, Vermont.

Eileen Christelow has written and illustrated numerous best-selling picture books including ten popular stories about the Five Little Monkeys, Letters from a Desperate Dog, and Vote! She lives with her husband in Dummerston, Vermont, and you can learn more about her life and work on her website, www.christelow.com and on www.fivelittlemonkeys.com

All are welcome to attend this new, ongoing series which will take place bi-weekly on Thursday nights (alternating with Israeli Folk Dancing).

For each meeting, participants are asked to read one chapter of a fabulous, relatively new book, ‘Fields of Blood: Religion & the History of Violence’ by the renowned scholar of comparative religion, Karen Armstrong.

The paperback may be purchased online or at Phoenix Books. Other than the cost of the book there is no fee for this course. 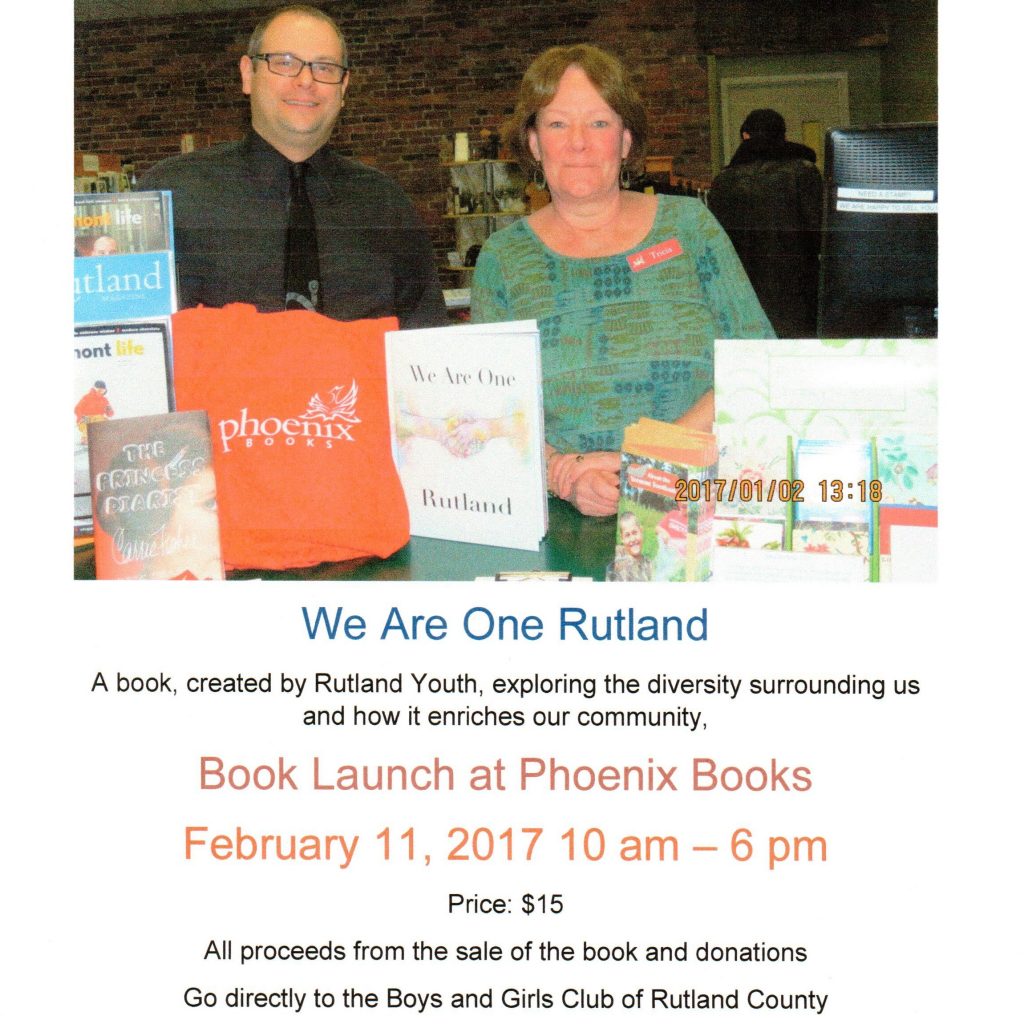 Join John Churchman, co-author of Brave Little Finn!
Meet the adorable and resilient baby lamb Finn in this true story about friendship and courage — a follow-up to the bestselling picture book phenomenon The SheepOver.
John Churchman is an artist, photographer and farmer, bringing stories to life with his enchanting photo-illustrations.
Free. All ages welcome.

ABOUT THE AUTHOR:  John Churchman is an artist, photographer and farmer, bringing stories to life with his enchanting photo-illustrations. John and Jennifer bring their talents together to give voice to the stories of all the animals that surround them and add boundless enjoyment to their lives. They have made their home on a small farm in the beautiful countryside of Essex, Vermont, with their daughter Gabrielle. They are also the authors of the New York Times bestseller The SheepOver.

Join Jack Mayer for a discussion of his new book, Before the Court of Heaven.

ABOUT THE BOOK:  Germany, after World War I. Ernst Werner Techow, son of a magistrate, a child of privilege, joins the violent right-wing response to Germany’s defeat. As a member of the para-military Free Corps and the murderous Organization C, he is recruited into a clandestine assassination network trying to bring down Germany’s fledgling Weimar democracy. These are the seeds of the Third Reich. Ernst participates in the 1922 murder of Foreign Minister Walther Rathenau, the highest-ranking Jew in the Weimar Republic. While on trial for his life, he receives an unfathomable offer of forgiveness that jolts his surety in the fascist cause and sets him on a complex journey of redemption. Throughout, he pursues his childhood sweetheart, Lisa. They are star-crossed lovers, their passion inextinguishable, buffeted by the rising storm of Nazi ascendance. Before the Court of Heaven, though fiction, is populated by historical figures and accurately depicts events as they unfolded in Germany and beyond. Animated as historical fiction, Before the Court of Heaven is an immunization against recurrence.

ABOUT THE AUTHOR:  Jack Mayer is a Vermont writer and pediatrician. His was the first pediatric practice in Eastern Franklin County, on the Canadian border, where he was a country doctor for ten years, often bartering medical care for eggs, firewood, and knitted afghans. From 1987 – 1991 Dr. Mayer was a National Cancer Institute Fellow at Columbia University researching the molecular biology of childhood cancer. He established Rainbow Pediatrics in Middlebury, Vermont in 1991 where he continues to practice primary care pediatrics. He is an Instructor in Pediatrics at the University of Vermont School of Medicine and an adjunct faculty for pre-medical students at Middlebury College. He participated in the Bread Loaf Writers’ Conference in 2003 and 2005 (fiction) and 2008 (poetry). His first non-fiction book, Life in a Jar: The Irena Sendler Project, has won many awards. His new book, Before the Court of Heaven, is historical fiction and has garnered nine book awards

News From Our Members – October 2016 Berkshire Bank, America’s Most Exciting Bank®, is excited to announce its acceptance of two graphic design awards from Graphic Design USA.  Berkshire Bank received two awards; for its digital work on the Game Plan website and collateral development and branding for Firestone Financial, a Berkshire Bank affiliate. Graphic […]

Join us for our weekly storytime at Phoenix Books Rutland!

Enjoy timeless tales and new adventures with your little ones.

Each week, we’ll choose a new picture book, a classic, or a staff favorite.